Much more than a soldering kit, theDemonstrator is a learning platform that helps you understand coding as well as the differences between discrete and microcontroller-based circuits.

This kit requires an Arduino Nano. If you add one to your order, it will come pre-loaded with our custom written “theDemonstrator” sketch.

This is an intermediate soldering kit. If you are just getting started with soldering, we recommend that you begin with our Soldering Basics Kit.

Take your skills to the next level with theDemonstrator soldering kit, which includes a through hole circuit board and 113 parts (including the 9 volt battery).

Features:
The top portion of theDemonstrator is an LED sequencer driven by an Arduino Nano (sold separately). The variable resistor and push-button allow you to control the speed and mode of the LED sequencer.

The bottom portion of theDemonstrator is an LED sequencer driven by a 555 timer IC and a 4017 decade counter IC. The variable resistor allows you to control the speed of the LED sequencer. 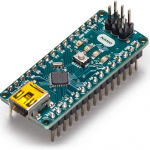 What is an Arduino Nano?
The Arduino Nano is a special kind of computer called a microcontroller. Microcontrollers allow you to control electronics and interact with the outside world through the use of a computer program. The Nano is designed to plug directly into a prototyping board.

The programs for Arduino microcontrollers are called “sketches”. When you purchase an Arduino Nano as part of your theDemonstrator kit, it comes pre-loaded with the sketch needed to control the top portion of your kit. Over time, you can learn how to write your own sketches in order to change the behavior of your kit.

Looking for theDemonstrator sketch to upload to your Arduino NANO? It’s available here.

We are now accepting pre-orders and the first batch of kits will ship on December 15, 2022.

Use this video in combination with the printable instructions.

Here’s an example of the Arduino Nano used with a prototyping board.

There are no reviews yet.

Only logged in customers who have purchased this product may leave a review.